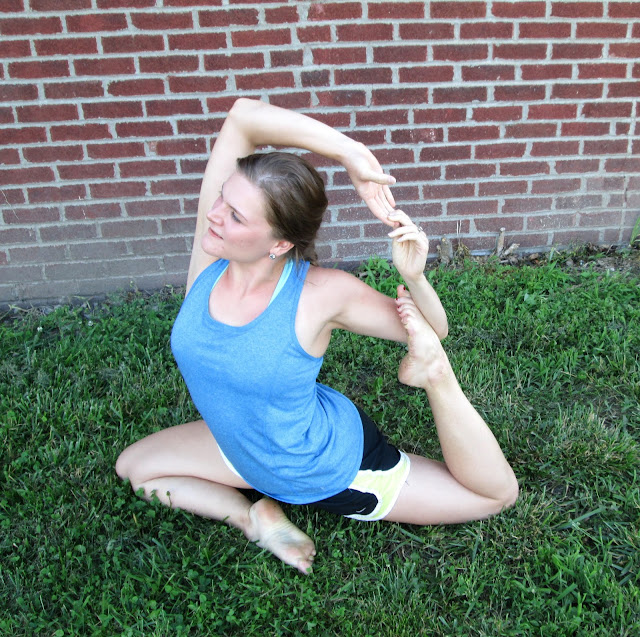 Sunday, June 21 has been declared an International Day of Yoga.  On Sunday yogis- disciplined instructors, first-timers, Hindus, Christians, atheists, athletes, Netflix marathoners- will set aside arguments and commune in asanas.

Yoga is breath.  If you can breathe, you can practice yoga.  Every day, every moment we humans already breathe together.  Sunday is the day we acknowledge this shared breath.  We will unify our bodies with intentional air, and if only for a moment, unify our spirits.  Yoga practitioners the world over will exhale our differences and inhale our common existence, our unifying creaturehood.

On Sunday, I promise to devote a few moments to consider my unavoidable unity to six billion other humans and trillions of other creatures.  I will find some time to contemplate the meaning of this bond and the responsibility it creates.

Posted by Unknown at 8:10 PM No comments: Links to this post

Email ThisBlogThis!Share to TwitterShare to FacebookShare to Pinterest
Labels: yoga

Review: The Girl on the Train by Paula Hawkins 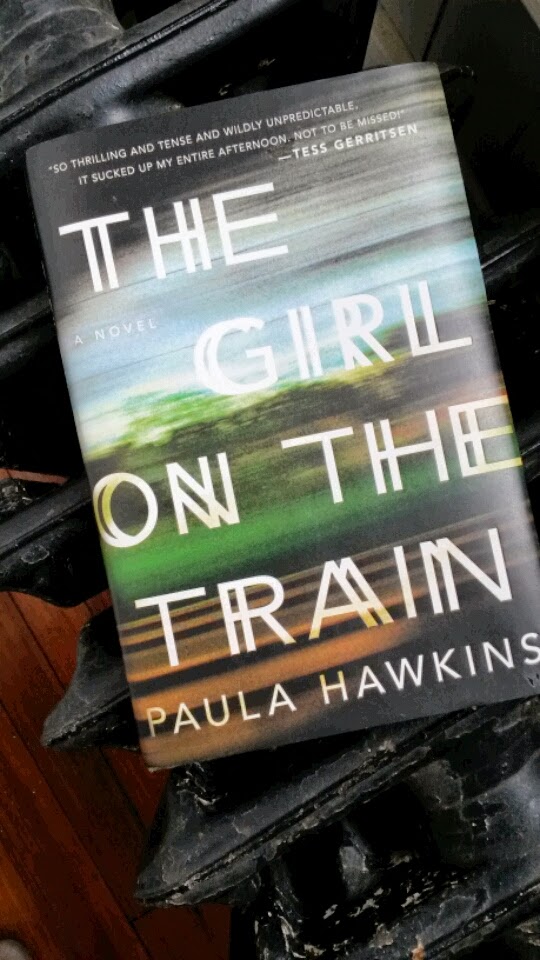 Rachel Watson takes the train into London every day, sits in the same compartment, stops at the same train signals, and observes the same trackside houses at these daily standstills.  One in particular holds her attention because it holds what Rachel imagines to be the perfect couple.  For a year she sees them through her compartment window several times a week.  She watches them out on their back terrace living life as though unnoticed, drinking coffee or wine, talking or holding hands.  Rachel constructs a narrative for them by piecing together the style of clothing she sees them wearing, the body language she observes, and most importantly, the life and marriage she feels she used to have.  She projects on her almost fictitious couple the idealized, sunshiny life she has longed for since her divorce.  One day Rachel observes something at her idyllic couple's house that jars her and then intertwines her in a thrilling mystery when the wife goes missing the very next day.

The idea of feeling connected to people you've never met simply because you have a rear window glimpse into their lives is a story seed that would make Alfred Hitchcock proud.  The main narrator Rachel is more than just a passive onlooker or busybody, however.  This character's alcoholic tendencies are worthy of Stephen King's praise, and together with her persistent love for her ex-husband, Rachel dumps a lot of her own baggage into this unsolved case.  To hide her drinking problem and its consequences, Rachel has become used to telling lies, but the missing woman, who is a secondary narrator, has many secrets and lies of her own.

Without spoiling anything, I want to comment on the feminism of The Girl on the Train.  The message on traditional gender roles is subtle at first but eventually comes forward as an important final note.  Throughout the novel, Hawkins' female characters all see their worth through the eyes of men.  As the story comes to a close, though, they all seem to find some level of personal strength to do what they know they have to do.  In confronting their individual fears of rejection in some form, they take one firm step towards emancipating themselves from the destructively limiting gender roles which they had previously fully accepted. (Come back to this after reading it, and hopefully it will make sense.)

The Girl on the Train is for the Gone Girl fanatic and adversary alike.  As someone who only saw the film adaptation of Gone Girl without reading the book, I have placed myself squarely in the second- and unpopular- camp of people disappointed with Gone Girl.  The movie version of Gillian Flynn's thriller had an interesting plot set-up but it was littered with inhuman, unrealistic characters that I found confusing and frustrating.  The Girl on the Train deals with similar themes of trust and envy within marriages but does so through believable motives maintained by flawed and fallible characters.  Both thrillers tell stories of wildly imperfect people but Hawkins manages to keep her female characters relatably, sympatheticly human.

In short, The Girl on the Train is absolutely craveable.  From the very first page, the pacing of the thriller is impeccably timed.  Hawkins feeds the reader a juicy new detail at exactly the right time and just when that bit has started to digest, the next exciting little piece of information is presented.  Be prepared to forego all responsibilities until this book is finished, and then be prepared to scour bookshelves for something similar to fill the new void.
Posted by Unknown at 8:41 AM No comments: Links to this post

Review: A Girl is a Half-formed Thing by Eimear McBride 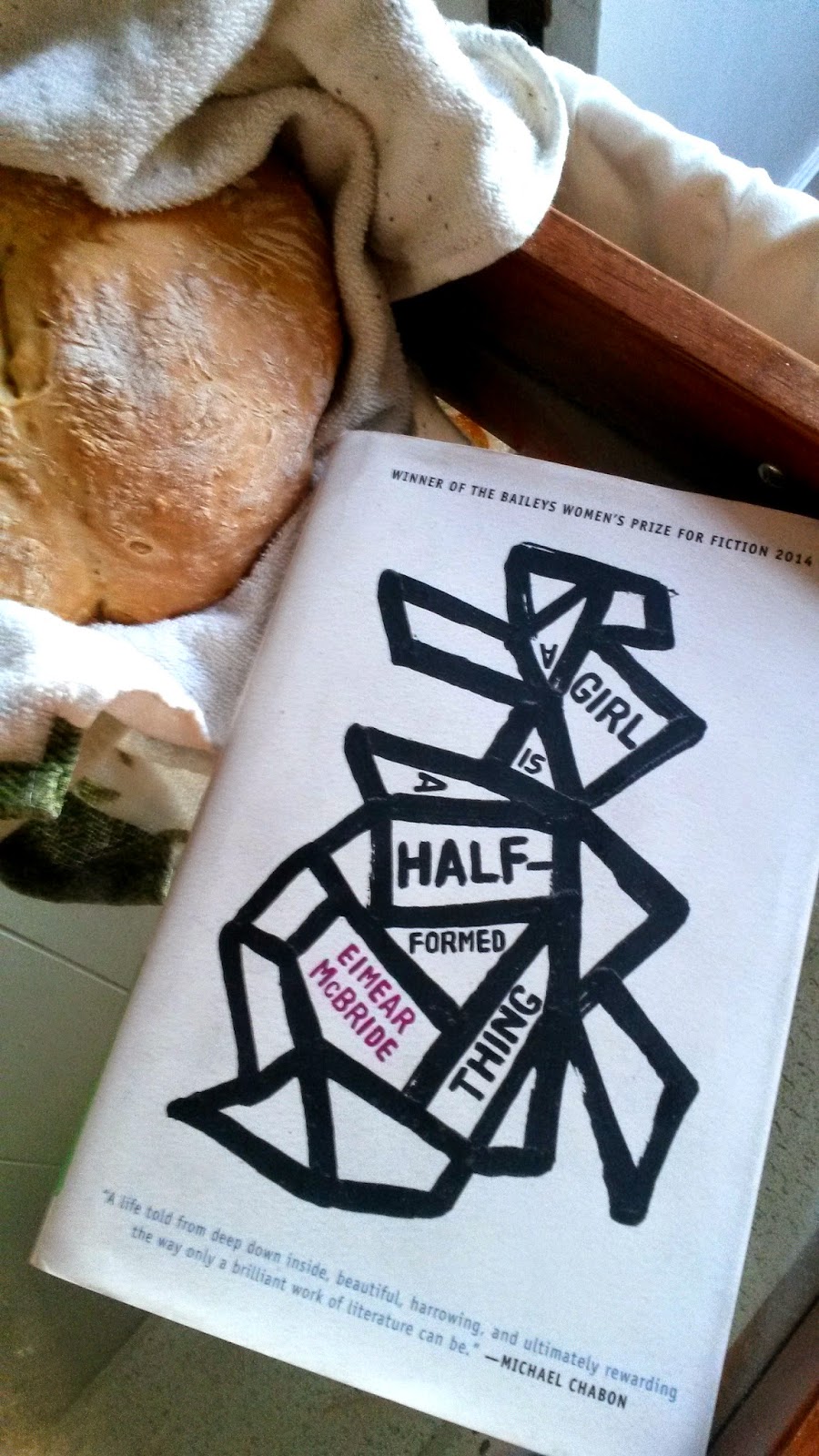 In March I always start to long for some beautiful, melancholy Irish literature.  Something to read while munching on Irish soda bread.  This year this crazy novel made the cut.  If you remember, it's been on my list for a while.  If you don't think it sounds like your thing, I still stand by these Irish reads.

A Girl is a Half-formed Thing is a story about love, although the theme is highlighted more by a lack of love and kindness rather than an abundance of it.  The protagonist begins her narration in the womb hearing events unfold, or imagining she remembers them unfolding, and thus claims presence at the most defining moment in her family's life: when her older brother is diagnosed and treated for brain cancer as a toddler.  The story follows this young Irish woman's memory of her childhood.  She is retelling it in honest fullness to her brother whose survival of the brain tumor left him partially intellectually disabled, and this fact shapes so much of her own story.

Her brother is the only person with whom the protagonist seems to truly sympathize.  The affection between the siblings is the only love she experiences.  Her father left the family shortly after her brother's cancer treatment as a small child, and their mother is usually cold and at times abusive.  The only compassion within the family comes from the protectiveness the sister feels for her older brother.

This half-formed girl searches for love in other places and uses sex to escape everything she deals with at home, from shame and loneliness to fear and pain.  Events at home force her to confront these feelings and it becomes obvious that compassion for her brother is the only love she has ever offered.

The writing is raw with half-formed sentences, and a thick Irish accent infects your internal narrator almost instantly.  The phrases are cryptic as lines of poetry.  There are no commas to guide you, no quotation marks or new paragraphs to signal a character's speech.  Nouns are verbs or there are no verbs at all.  It takes a while to get used to McBride's version of English.  I had to reread the first few chapters to fully understand the scenes.  This linguistic anarchy is as close to real human thoughts as I have ever read.  Once you get into the rhythm, your mind recognizes its own scattered, mashed-up way of speaking to itself.

This novel is uncomfortable, difficult, ragged, and ultimately thought-provoking and rewarding.
Posted by Unknown at 10:04 PM No comments: Links to this post

Let's all agree that Amy Poehler is adorably great.  I love the shows she has appeared in (Arrested Development), starred in (Parks and Recreation), and produced (Broad City).  She never seems to hold back, always giving an honest and unapologetic performance, especially as Leslie Knope in Parks and Rec.  After reading the cover of Yes Please in Target, I decided it had enough Poehler fun and honesty to check out from the library.

Before I go any further, I really need to confess that the blatant disregard of that comma in the title upsets me.  This irritation has not lessened over time, and if I had not finished this book and this post sooner, I really cannot say what might have happened. 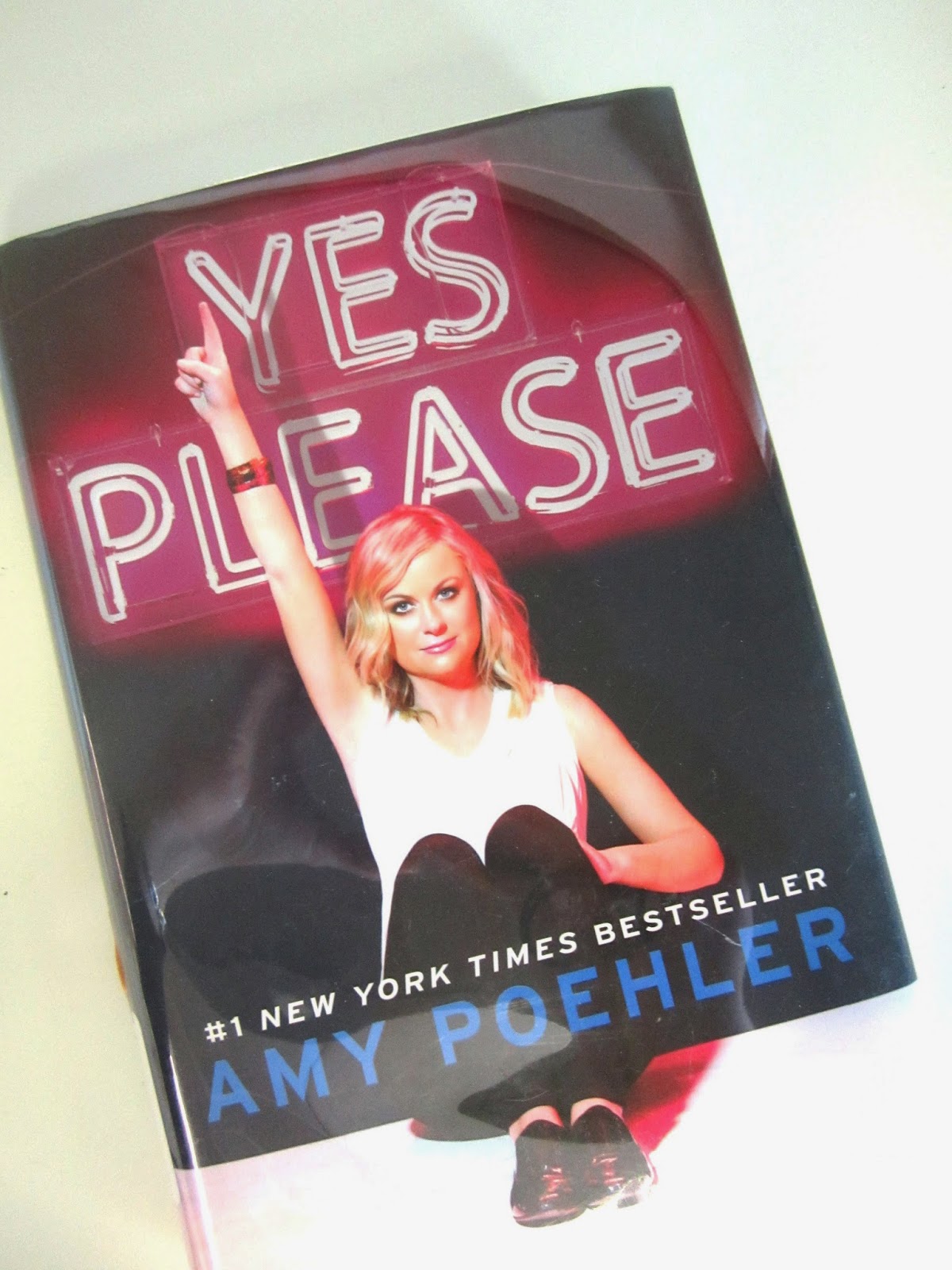 I have read very few memoirs.  In fact, I'm not entirely sure what a memoir is.  The only one I know I've read for sure is the wonderful The Glass Castle because it told me it was "a memoir" right on the cover.  Having never read a comedian's memoir before, I did not really know what to expect.  It was a collection of the experiences that have led her to this moment, the moment where she is famous enough and old enough to write an entire book about her journey and have people actually interested in reading it.  A criticism I had while nearing the end was the question of audience.  Who exactly was supposed to be reading this?  It seemed like a very long letter to Poehler's closest friends, which provided a nice intimate tone but felt slightly exclusionary.  Then after reading this great review, I agreed with this blogger that Amy Poehler was writing for herself.

Yes Please reads almost more like an advice book than a memoir, and there were several quotes or mottoes that resonated with me.  A favorite about knowing her own tricks: "I am really onto myself.  I've got Amy Poehler's number."  Another, in regards to choices women have to make as parents and career people: "Good for you. Not for me."

This book was quick, mostly light, and funny with a lot of charming photos.  If you like Poehler, you should read it and become your friend circle's Amy Poehler expert.  And if you've never checked out her "Smart Girls at the Party" video clips on her website, go! Do it!  Here are some good ones:

Posted by Unknown at 9:49 PM No comments: Links to this post 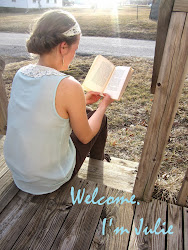